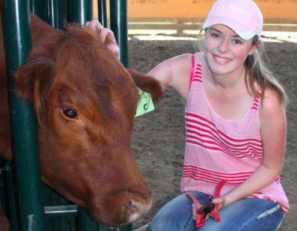 “I had just finished telling my dad I was going to ride afterwards,” says Devon Smith, describing the moments leading up to her accident.

“I waved to a neighbour going down the road, then I woke up a couple days later in the hospital. These accidents all happen so fast and I’m grateful I do not remember mine.”

Devon was seriously injured on her family’s hobby farm in Enderby in 2014. She and her dad were building a fence in their cow pasture, using an auger to drill post holes. This tool is like a rotating screw blade and was being powered by their tractor’s power take off (PTO).

“If I had been paying closer attention to what I was doing, I might not have slipped and fallen onto the PTO where my jacket and hair became entangled,” Devon says. “I had used the auger a handful of times and my dad had used it before, MANY times, without problems and therefore didn’t even think anything would happen.”

Devon speaks to groups of workers about her experience. I asked what she wanted people to take away from her talks, which Wendy Bennett of AgSafe (formerly FARSHA) describes as “riveting.”

Take the time to think about what you are doing

“The most important thing I want people to let really sink in and remember is time,” Devon says. “Take the time to make sure your equipment is in proper working condition and all the safety measures are in place. Take the time to think about what you are doing and pay attention to the task at hand as if it was your first time. I find doing something for the first time I pay closer attention to the details and am well aware of what I am doing.”

Devon says the auger had not been serviced recently before her accident.

“It was likely over 50 years old! Had it been seen by a licensed mechanic recently, it wouldn’t have left the shop without the correct shield on the PTO,” she says. “My Carhartt jacket was too big, my hair wasn’t tied back, and my mother’s rubber boots were a size too large to be walking around on the slippery clay.”

This news release describes more about Devon’s experience, including a week on life support, with 13 broken or fractured bones, a separated right lung and a stroke to the left side of her body after a carotid artery in her neck collapsed. She spent five-and-a-half weeks in the hospital.

In a 2015 press release, WorkSafeBC reported 145 equipment and machinery-related serious injuries on B.C. farms since 2009 — 11 of them fatal. See their free online resources for working safely with tractors and PTOs.

SAFEWorkManitoba says PTO entanglements are one of the Top 3 incidents to agriculture workers. Below is their new video on the subject.