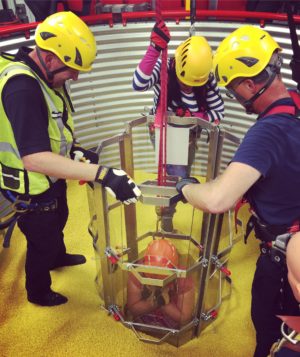 Entrapment in grain can happen faster than you expect. In 2015, seven people – including four kids – died in Canada after being entrapped in grain.

Nicole Hornett is a farm safety coordinator with Alberta Agriculture & Forestry. Nicole is sharing what she learned in a recent training exercise organized by the Canadian Agricultural Safety Association (CASA) at the Asmark Institute in Bloomington, Illinois. She’s talking with employers and workers about the hazards of handling grain.

Nicole describes the rescue exercise. She says she stood in the middle of the bin as the team ran the unloading auger, to become trapped purposefully.

“I could feel the grain start to pull away from my feet and could see I was sinking into the grain. Once I was about knee-deep, I could start to feel the pressure building on my calves. By the time I was hip-deep, the pressure on my legs was very noticeable and fairly uncomfortable. I couldn’t wiggle anything. I went in about half-way up my chest so I was still able to breathe quite easily,” she said, imagining how it would feel in reality and not as part of a training exercise.

“I can’t even imagine the fear and uncertainty a farm worker might feel if they were out working and realized they were becoming entrapped.”

Farming safety advocates are raising funds for a mobile training unit that will be used in rural communities for grain entrapment demos and rescue training. It’s part of CASA’s Grain Safety Program that includes:

“They may not believe they will become entrapped in the grain, or if they do that they’ll be able to free themselves,” she says. “That’s just not the case.”

Here in BC, AgSafe is also supporting CASA’s grain safety program. I’ll tell you more later about their work in BC’s North.

[Photo: Farm safety coordinator Nicole Hornett in rescue training unit for grain entrapment. Here she is installing a cofferdam around the entrapped person.]