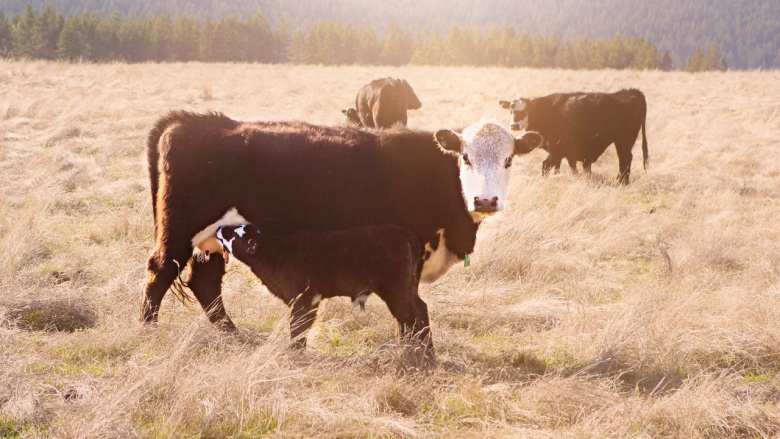 Cariboo ranchers say they lose up to $10,000 in cattle to vehicle collisions each year.

A Williams Lake rancher is trying to beef up drivers’ awareness of open range cattle on rural roads.

Monica Altwasser says she loses two to three calves each year because they are hit by vehicles.

“It’s entirely avoidable. Cattle guards are crossed, signage is posted, reasonable speed limits are posted. There’s manure on the road; there’s all these indicators that you are travelling within open range,” she told Shelly Joyce, host of CBC’s Daybreak Kamloops.

Altwasser runs the Fraser River Ranch with her husband, Mike. He estimates the ranch loses up to $10,000 a year because of the issue.

The Range Act and Land Act allow for ranchers to graze their cattle on Crown land within set boundaries with permits granted by the Ministry of Forests, Lands and Natural Resource Operations.

The British Columbia Cattlemen’s Association says the cost is often absorbed by ranchers because people leave the scene of an accident and with no way to identify the vehicle involved, and insurance claims are often denied.

“That’s a cost right out of their pocket at no fault of theirs, on top of the fact that they’re paying the rent on the range as it is,” said Kevin Boon, general manager of the BCCA. “They just can’t do it.”

He said he knows of one rancher who has lost six to 10 cattle a year over 10 years and never had a claim approved by the Insurance Corporation of British Columbia.

Boon recently sat down with representatives from both the provincial Ministry of Transportation and ICBC to discuss potential solutions for raising public awareness and compensating ranchers and felt both groups are open to finding new solutions.

However, he says the only truly effective way to reduce both the impact to ranchers — as well as the danger to motorists — is for drivers to slow down and pay attention.

If you hit a cow, don’t leave the scene, says Monica Altwasser. The best thing to do is call the police and take a picture of the cattle’s branding mark if possible.

She says if the rancher can’t be located, drivers should contact Livestock B.C., which retains records of all cattle brands in the province and can track the owner of the cow.

“We want the public to stay safe we want our animals to stay safe, that’s really the goal here,” said Altwasser.