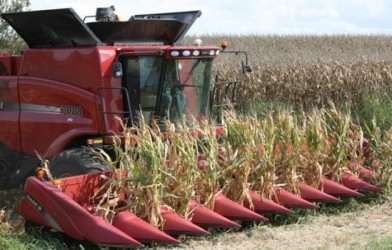 You’re running your combine and hear the following sounds. Can you diagnose the cause?


The Sound: A “bam!” or “pop!” when engaging the separator or unloading system–followed by slow shaft speed warning buzzers going off in the cab.

The Cause: This sound is often the result of a shear bolt breaking on an auger or belt drive. Identify why the shear bolt broke before replacing it. If there is no obvious clog, slug, plug or obstruction to cause the shear bolt to break frequently, be suspicious that the holes in the hub or pulley are egged-out with enough freeplay to shear the bolt during normal operation.

The Cause: The rattle of a slip clutch is a familiar warning that some belt, conveyor, auger or other system is overloaded. Determine the cause of the overload. Don’t give up until you find the cause. Unless severely worn, slip clutches don’t lie.


The Sound: An increasing odor of burning rubber accompanied by a “whap-whap-whap” sound.

The Cause: It’s never a good thing to smell burning rubber on a combine because it’s usually from an overworked, over-heated drive belt. If the odor is accompanied by a “whap-whap-whap” sound, it means the belt has begun to de-laminate and strands of the belt are flailing against nearby machinery. Ignore the smell and sound long enough, and the sound of a slip clutch rattling will soon be added to the mechanical symphony.


The Sound: A clang-clang-grinding sound that’s only evident when the combine is running empty on end-rows.

The Cause: Augers with failed bearings make a clanging sound when they hit their housings. They may run silent when full of grain, but get noisy on end-rows when the combine empties out. Any unusual noises that appear on end-rows or when combines are running empty suggest significant problems that need to be diagnosed.

And finally, here’s a noise I heard in a combine cab that only took a few seconds to figure out. I was riding with the operator, and kept hearing a faint voice saying, “Hello? Hello?” There was a brief silence then a string of faint profanity, as the operator got cussed out for accidentally “butt dialing” his best friend.