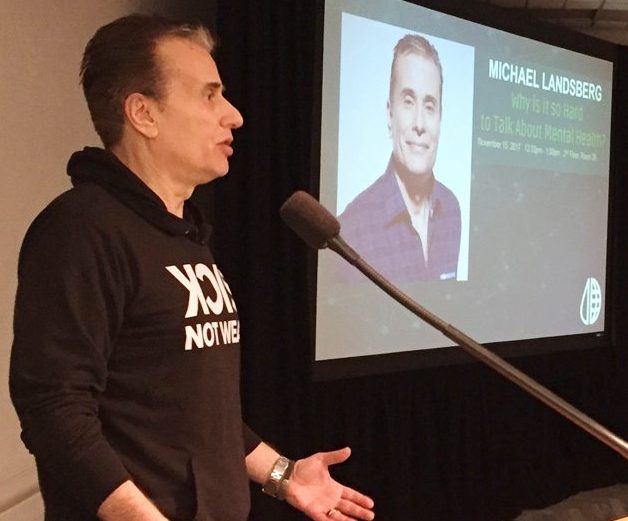 It’s the darkest and bleakest time of the year, and that can wear down the toughest people’s defences.

It’s actually less dark right now than usual for this time of year, because there’s so much snow everywhere across the Prairies, but that snow also comes with much colder conditions than usual, so it doesn’t seem any better.

Farm input bills are coming due. Maybe this year’s harvest didn’t turn out so well. The challenges for next season might seem large, even overwhelming. Winter looms.

I’m thinking about this because yesterday at Grain World I and hundreds of farmers and agriculture industry people saw Michael Landsberg give a compelling speech, presentation and rally about mental health and the importance of facing up to our own limitations, about the need for us to accept when we need help, and the need to break the stigma about accepting others’ or our own mental health vulnerabilities.

Landsberg is a famous sports journalist, so a lot of people are willing to listen to what he says. He’s taking that fame and doing a lot of good with it, travelling the country to urge more attention to mental health, using his own story of dealing with crippling anxiety and depression as a way of breaking the taboos around this often ignored subject.

Farmers are particularly vulnerable to the damage that depression and anxiety can cause. They are generally self-reliant people who pride themselves on being able to face up to challenges without complaining, who often don’t like sharing their feelings, and who live in inherently isolated conditions. If depression or anxiety begin to overwhelm them, they can easily retreat further into isolation and that can lead to a spiralling of problems, and sometimes tragedy, as the individual becomes unable to cope with the demands of life.

I keep an old white board in my office. The words on it are more than a decade old. On one corner of it are the words “Guy who starved animals.” That was my crass way of recording a story idea about a phenomenon I had noted with puzzlement, one that cropped up about once a year. A farmer somewhere on the Prairies would be found to have allowed dozens or hundreds of animals to starve or become so badly neglected that they would need to be put down. Generally the farmer was denounced and charged with cruelty to animals. The phenomenon never made sense to me, because why would a guy left his property, his business, his calling and his status in the community disintegrate right in front of his eyes?

When I finally dug into it in 2004-05 I discovered a horrifying reality: rather than being evil animal-abusers, these men (and all the examples I could find were male) were almost certainly dealing with profound depression and were simply unable to get out and take care of their animals and farms. They were hiding this depression, but when somebody is responsible for hundreds of animals or thousands of acres, signs of problems can be seen. Unfortunately, many people respond to these situations by being morally judgemental, rather than being wise enough to spot that something is likely to be profoundly wrong with that farmer, and that he might need help.

I won’t describe the stories I wrote then, but here is a link if you’re interested in going deeper into the topic of farmer depression: Connecting the dots

I’m writing this post because you might know a farmer or somebody in agriculture who might be in situation of depression or crippling anxiety, they might be trying to hide it, but you might be able to reach out and help them. It’s worth thinking about and you could do a lot of good if you’re able to help a friend or relative in a tough situation. That was one of Landsberg’s big points yesterday. Little acts of connection and communication can have a big affect on a person at the end of their tether. Here is a link to Landsberg’s Sick Not Weak website, which has lots of great advice and resources.

The stories I wrote back in 2005 stay with me, and talks like Landsberg’s bring up a lot of feelings for me, because I’ve been in the situation of having a friend dealing with depression and not being able to deal with it. He didn’t know how to deal with it and committed suicide. I didn’t know how to even spot that he was having problems and wondered for 20 years what the heck happened and why I had no sense that anything was up.

Working on those stories educated me about depression and its signs, and I encourage you to get educated, because you might have a friend out there who needs help and you just aren’t seeing it.